Bubsy: Paws on Fire (2019)
Arnold is Bubsy's sidekick/pet that appears in the TV Pilot, the second game Bubsy II, and the sixth game Paws on Fire. He is an blue armadillo who suffers from constant paranoia, his biggest fear are trucks, the twins Terry and Terri, and about everything else could possibly get him killed.

Arnold is first seen asleep on Bubsy's couch, the unwilling pet/sidekick of Bubsy. As Arnold is constantly worried about everything he has an aversion to Bubsy's constant question "What could possibly go wrong?" As Arnold is electrocuted, chased by a truck, stepped on, and used as a cudgel for Bubsy to hit himself he serves as a straight man for Bubsy's comedy antics.

Arnold is playable in a minigame where he is blown around in a truck's engine and collects balls from inside. The minigame ends with Arnold deposited on the highway underneath a semi truck. Arnold lands on his feet safely between the truck's wheels, or in front of the wheels depending on which exit you steer Arnold to.

Bubsy mentions his sidekick while on the planet Rayon by saying "This would've KILLED Arnold!"

Arnold is seen partying with Bubsy and Virgil at the "14th Annual Yarn Ball" in a gymnasium at the beginning of the game. Throughout the game Arnold helps Bubsy attain "Victory Coins" needed for boss fights by collecting gems and fruit in underground bonus levels. While Arnold complains for comedic purposes, he appears less fearful and more supportive of Bubsy.

During an interview with Michael Berlyn with the Bubsy Bobcat Fan Blog he mentions that all the characters featured in the pilot were in early development while he was working on Bubsy in Claws Encounters of the Furred Kind. 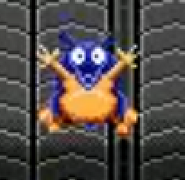 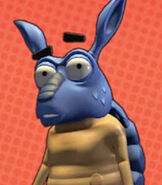