Bubsy: The Woolies Strike Back

Bubsy: The Woolies Strike Back

Microsoft Windows, PlayStation 4
Bubsy: The Woolies Strike Back is a game developed by Black Forest Games released on October 31, 2017 for PC and PlayStation 4. The game is the fifth entry in the Bubsy series, and the first new entry in 21 years.

Our favorite Bobcat is making a triumphant return 21 years after virtually disappearing from the world stage (N64/PS1). Yes, that’s right, Bubsy is back and starring in an all new adventure, Bubsy: The Woolies Strike Back! Yep, those no-good, yarn stealing always annoying intergalactic trolls, the Woolies, are up to their no-good ways once again! They’ve stolen Bubsy’s most prized possession, the Golden Fleece. Now Bubsy is on a one Bobcat mission taking on Woolies, Bumble Bees, Sharks, and UFO's to collect an insane amount of yarnballs and bring his Holy Grail of Wool home.

2D, or not 2D? Bubsy thinks 3D is so 1998 that he’s going back to the 2D well with a huge assist with his good friends at Black Forest for 14 rip roaring levels of side scrolling action. Watch Bubsy glide like a bat, jump like a jack rabbit, bounce like a red rubber ball and run…run Bubsy run. This is the Bubsy adventure you were born to play.

The game was first announced on June 8, 2017, as a brand-new game in the Bubsy series of video games. The entry is the first one in the series in 21 years, following 1996's Bubsy 3D.The game was announced as the first of many game franchise revivals of Accolade games (which, along with Bubsy, is a brand name now operated by Hong Kong company Billionsoft), including potential revivals of HardBall!, Slave Zero, Deadlock: Planetary Conquest, Eradicator, and Redline. The game was published by Tommo's subsidiary UFO Interactive Games, and developed by Black Forest Games, who previously worked on reviving the dormant Giana Sisters series with Giana Sisters: Twisted Dreams. Like Twisted Dreams, the game was developed using the Havok physics engine. To make Bubsy: The Woolies Strike Back an improvement over previous games in the series, Black Forest Games reduced Bubsy's acceleration time, and applied better traction, thus giving the player better control of the character.

In August 2017, a limited edition, called the Purrfect Edition, was announced for the PlayStation 4 release, which contains a physical copy of the game, a soundtrack CD, a copy of Bubsy's official "business card", and a "Mystery Bubsy Movie Poster postcard".

The game announcement was generally not well-received by video game journalists, whose reactions ranged from indifference to irritation.  Accolade seemed to expect this, taking an approach similar to Sega with promoting Sonic the Hedgehog on social media; a dedicated Twitter account for the character that makes self-deprecating and aware comments about the franchise's negative reception of some past titles was created. 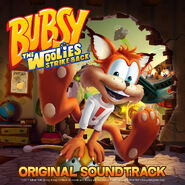 Bubsy™ The Woolies Strike Back Teaser