"What could possibly go wrong?"

Bubsy Pilot 'What Could Possibly Go Wrong?'
Bubsy in Claws Encounters of the Furred Kind (official)

Bubsy T. Bobcat is the main protagonist of the platformer game franchise, Bubsy.

Created by Michael Berlyn, Bubsy served as the mascot for Accolade during the 90s. Bubsy has been voiced by Brian Silva, Rob Paulsen, Lani Minella, and Dan Castellaneta.

Bubsy is a wise-cracking, anthropomorphic humanoid Bobcat (or Mountain Cat in Japan) that believes himself as a hero despite usually making things worst and fixing them by mistake. Bubsy owns the worlds largest yarn collection, which made him the target of the woolies who seeked out more yarn for their home planet Rayon. He has an (Reluctant) Sidekick named Arnold, who is also his pet.

Bubsy's only known relatives are his nephew and niece Terry and Terri. Taking this in mind, Bubsy has a unknown brother/sister who has never been mentioned in any comics or games.

Oblivia has shown a interest in Bubsy romantically, but Bubsy does not share these feelings with her.

Bubsy has orange-brown fur with tan fur on his muzzle, underbelly, and soles. His cat-like ears also have dark tuffed ends, just like a real bobcat/lynx, as well as claws on his hand-paws and feet-paws. He also has blue eyes and a tuft of orange hair-like fur or fur-like hair on his head.

The only article of clothing that he usually seen wearing is a simple white shirt with a huge red exclamation point on it (depending on the game, the sleeves of his white shirt can either be short sleeved, like a t-shirt, or elbow-length). However, in Paws on Fire (and presumably beyond), he is shown to wear yellow and white trainers. Much like a lot of anthropomorphic humanoid animal characters, such as Donald Duck, Bubsy doesn't wear pants.

Despite Bubsy's surname, "Bobcat", implying that he is a Bobcat, he doesn't really resemble a Bobcat. In fact, according to USgamer, he more closely resembles a Lynx in apperance, due to several traits such as longer tufs on his ears, large hand-paws, no noticable spots on his back, etc. The only Bobcat-like trait he does have is a short tail of some length with a underside, much like a real Bobcat.

During the 90s, the platformer game was dominant game genre at the time. The release of Sonic the Hedgehog to challenge Mario's dominance of the platforming genre during the Console Wars between Nintendo and Sega led other game companies to attempt to cash in on the mascot platformer niche.

One such company was Accolade, which needed its own mascot platformer to represent them. Accolade would turn to Michael Berlyn to design them a mascot and a game for this mascot. Michael Berlyn inspiration for Bubsy (both the character and overall gameplay of the Bubsy series) was based off Sonic the Hedgehog, which Michael Berlyn played on average 14 hours a day.

Bubsy's gender and species was not originally concrete in early artwork, eventually however, Bubsy would be depicted as a male bobcat. Bubsy was originally going to wear green tennis shoes, but these were cut prior to Paws on Fire. 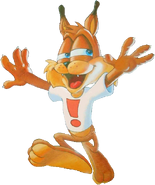 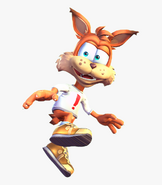 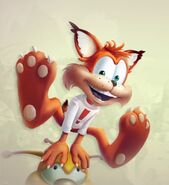 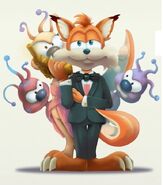