To promote the original Bubsy games, lots of special promotional merchandise was created to sell copies. A lot of this merch is lost and cannot be found online, however some pictures have surfaced of certain promotional material.

Most of which are extremely rare to come across and cannot currently be found for sale anywhere. If you happen to find some Bubsy merch for sale, it is highly recommended you take a screenshot to add here! 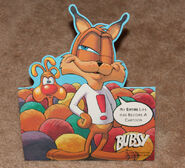 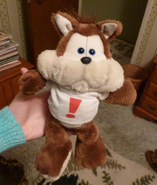